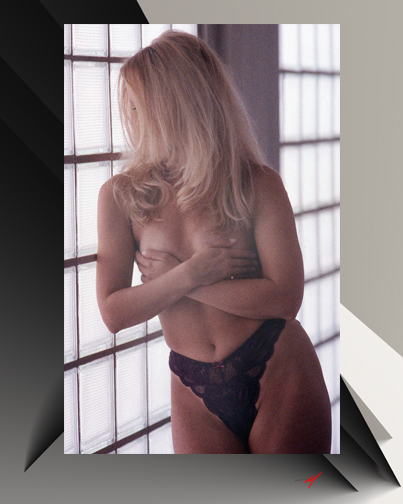 Another from the archive from way back when. Over the years this model and I did a lot of work, some sessions worked real well, others not at all. Bad chemistry, just an off day…, this session worked really well, we were in the zone.

She came down as I remember for a quick shoot, had to go back for work. We were having such a good shoot that she called into work, told them something had delayed her, she cover the next day. Because we were old friends we had wine, started working she wearing a string dress with black undergarments. In the middle of our shoot a guy from next door came out to use the facilities. He froze in place seeing a scantily clad young woman posing against the block glass walls, I am sure he got a good look too.

My model was nonplussed, not too much later she got into her panties for this shot. After we moved into the studio for more work, the vibes had changed somehow. She complained that I always wanted her nude, which tell the truth was right. But sensing the mood change I told her she could put something on if she preferred, she fled into the changing room. We did work some more, but the spell was broken any film I shot from that point on was a waste. So I suggested lunch, a relaxed lunch at that, then she went back home. No harm…. No foul, things just hadn’t work out as we had planed.

I’ve learn over the years from that things just happen that are beyond you control. Shooting film it can get expensive, Shooting the way I do, no release is signed before the model get to see what we got on film can really be expensive. I’ve had model change their mind’s only after the expense of the shoot we’re covered. Hard not to get annoyed at that point, but shit does happen so learn to move on.